Guess where I am right now? (Or just look at the post title for an easy cheat.) That’s right, I’m back in Ireland! And there’s a contest in this post!

So let’s start with the embarrassing part. I was supposed to leave on Thursday. I drove a leisurely three hours to pick up my friend Kate (K.T. Ivanrest), drove another two hours to the airport, parked, took a shuttle, walked into the terminal, and immediately remembered that my passport was in my kitchen.

That’s right. It’s not that I only discovered my passport was missing when I was asked for it and couldn’t find it, no, my brain was fully aware that I wasn’t carrying it and just neglected to inform me of this important fact at any time prior to entering the actual terminal.

So I waved Kate a merry goodbye, rescheduled my flight for the next day, and drove home. Drove back the following day, with passport. Good thing I have an electric car. 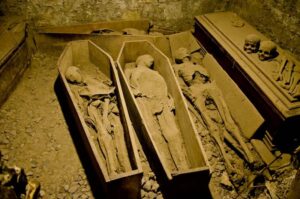 Saturday morning I joined Kate in Dublin, and we went to St Michan’s church, the oldest in Ireland and built on an original Hiberno-Norse church site (more Vikings!). The church has some interesting history just by virtue of its age and location, and it features a fabulously grand organ once used by George Frideric Handel before his Messiah‘s debut (Dublin 1742), but it’s most famous for its crypts, which by some quirk of nature (some credit the combination of temperature, humidity-absorbing limestone, and methane) naturally preserve their interred corpses. These displayed “mummies” have a lot of local folklore about them; one is supposedly a crusader, though I and some others have our doubts, and the vague identities of others are likely apocryphal but still they’re intriguing.

Most of the crypts are long, the full width of the church, but the one with the displayed mummies has a more modern wall to cut it short. Kate and I wondered what was walled up behind, and as our guide could not answer, we’ll just have to write it ourselves. 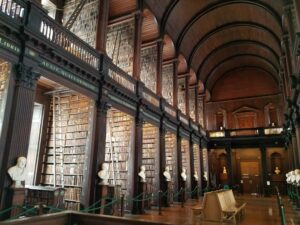 Then we went to see the Book of Kells at Trinity College, which was amazing, and upstairs to The Long Room, the famous library. Fun fact: besides appearing in the Harry Potter films, it’s also the Jedi Archives.

No, no, instead of having white busts on black plinths, it has black busts on white plinths. TOTALLY DIFFERENT. 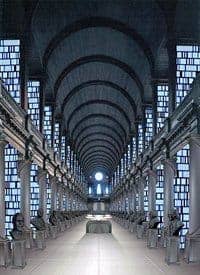 In case you thought they forgot the barrel-vaulted ceiling.

Lucas insisted there was no connection between the film design and the Long Room library, probably because he never asked permission to use the building. But seriously, George, attack of the clones? You’re not fooling anyone.

Sunday we went to services at Cathedral of Our Lady Assumed into Heaven and St Nicholas in Galway and then to the Corrib House for brunch. The food was amazing. Forgive me, but I sneaked some photos to share.

Kate’s coffee came with a dragon. A happy one.

A proper pot of tea, all cinnamon and ginger to combat the unseasonable cold. 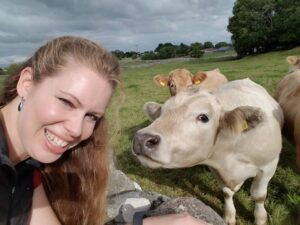 Making a new friend in Ireland.

And then, and then, the tour itself started today.

Today (Monday) we visited a castle (started 1228), a paleolithic stone circle with gorgeous ancient trees, a paleolithic cairn, a 7th century abbey*, and walked through a forest full of caves and history. Last night we visited a extremely well-preserved Franciscan friary (established 1351). So much fun to visit and revisit! You can read about these from my previous posts on the 2015 event.

Tomorrow is a full day of writing workshops and I hope to make some good progress on my several works in progress.

Me without yew. (Yew’re welcome.)

Does all this sound awesome? Want to do it with me next year? Check out Ireland Writer Tours 2017 for a writing tour and workshop in Ireland with me as your coach and instructor!

*As I walked through the abbey, I was humming “Be Thou My Vision,” a Christian hymn written in the early Irish church, no later than the 8th century and possibly as early as the 6th — meaning it certainly would have been heard in this abbey which thrived until suppressed by Henry VIII’s politically-laden new Anglican program in 1542. (Note that the hymn’s familiar modern melody was adapted only in 1919.) I first stumbled across the hymn’s Celtic history in 1996, hearing Iona’s Gaelic version on their album Journey Into the Morn. I then realized there are still hints to its origin even in the modern English translation, such as “high king of heaven,” a phrase which makes much more sense in old Irish culture with many regional kings and one “high king” than in our modern sense of monarchy.

It’s been a long while since we’ve done a contest here, so let’s do something fun.

The prize: I’ll name a character after you in my Greek-Norse mythology WIP. Or if you’d prefer, I’ll name a character after your friend or relative. You get to choose if you’re a good guy or a bad guy, and whether you live or die. I reserve the right to modify the name if necessary to fit the milieu. (For example, if your choices place you in the middle of a warband with names like Miloslav and Tikhomir, and your name is Bob, it’s not going to work for readers. I might suggest Radomir as a substitute for Robert, or you can choose to fictitiously kill your evil regional manager Nick as Nikola instead. If you’ve really got your heart set on using your name without modification, we may move to another story where it will fit more happily.)

The entry: Leave a comment with your best guess as to how many times I actually checked that my passport was in my purse before I left the house again for the airport on Friday. (Yes, I know the exact number.)

Any ties will be settled by a roll of the dice. As a tabletop gamer, I have plenty. Entries due by July 20, 2016. Good luck!