After a full day of writing instruction and discussion with Susan Spann and Heather Webb, we went out for dinner and a pub crawl. I don’t drink much at all, but I figured when in Ireland, do as the Irish do, and so I did have my first whiskey that night, a Bushmills 21 Year Old Single Malt Irish Whiskey. “It’s like butter that’s on fire” was my impression. 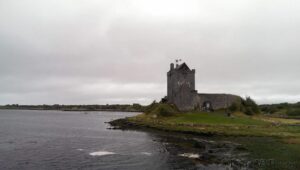 The next day we went out again, stopping briefly to photograph Dunguaire Castle (Caisleáin Dhún Guaire) en route to The Burren. This is a region, now a national park, formed of weathered limestone and the resulting treacherous and sparse landscape. The Burren (Boireann, or “great rock”) is an ancient place, both geologically and anthropologically; there are multiple remnants of ring forts and more than 90 paleolithic tombs. 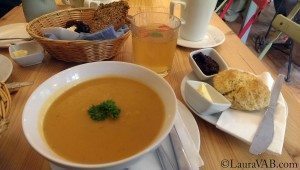 warm and tasty lunch at the Burren Perfumery

A karst landscape like The Burren is made up of “clints” (surviving isolated rock) between “grikes” (weathered or dissolved channels) and is best addressed by sure-footed sheep or dependable hiking boots. The Burren supports an amazing number of plant and butterfly species — three-quarters of Ireland’s flower species grow in The Burren, and many are unique to it — despite the far-from-lush soil; many fragile flowers appear in the grikes and are sheltered by the clints. It is “a country where there is not enough water to drown a man, wood enough to hang one, nor earth enough to bury him…… and yet their cattle are very fat; for the grass growing in turfs of earth, of two or three foot square, that lie between the rocks, which are of limestone, is very sweet and nourishing” (– Edmund Ludlow, second-in-command during the Cromwellian conquest of Ireland).

It’s good for grazing ruminants, but has little other agricultural use, which is why Cromwell pushed the Irish onto the karst to starve. Today its flora fuels the Burren Perfumery, which uses local flowers and products to produce internationally-famous scents. I bought one for myself and several others as gifts. They are subtle and natural scents, which I like better than most fragrances on the market, and hey, they’re even on Amazon these days if you want to try one.

We went to visit the Poulnabrone (Poll na Brón) dolmen, a portal tomb constructed of local limestone over 5,000 years ago. Portal tombs are so-called for their shape, like a doorway. The dolmen collapsed due to a cracked stone in 1985, and excavations during restoration indicated 20-30 people, adults and children, were buried inside during the Neolithic Age.

wildflowers in the Burren

And in the what-makes-a-writer-brain-tick category, there was one other burial found — an infant, buried just inside the portico but not within the chamber itself, placed there over a thousand years after anyone else. What happened there? Whose child was that, and why could he not be buried where his people were usually placed? This needs a story.

Incidentally, there have been some intriguing discoveries lately on the history and anthropology of Irish settlement and displacement. These dolmens weren’t built by the Celts, but by the Mediterranean people who lived there before their arrival. See this article for a quick overview, and consider the ancient Irish legends which tell of new peoples arriving from lost lands overseas and the great battles that were fought with them. 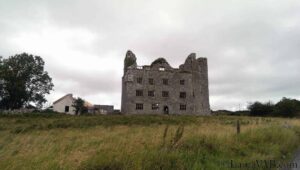 Leaving the Burren we paused at the ruined Leamaneh Castle, the house of Red Mary. The house itself dates to about 1480, built by one of the last Irish High Kings, Toirdelbhach Donn MacTadhg Ó Briain. Máire ní Mahon married into the family in 1639, bringing a fortune inherited from her first husband, and they conducted raids upon the English. In 1651, Conor O’Brien was mortally wounded in fighting, and Máire knew that the Cromwellian troops would seize her property, leaving herself and her son penniless and helpless in a besieged country. It is said that she drove herself to Limerick and straight into the English camp, offering to marry any Cromwellian officer who would take her. By this, she preserved her estates and fortune and the future of her children. General Ludlow (see above) described her Leamaneh Castle as “being built with stone and having a good wall about it, we put a garrison into it and furnished it with all things necessary.” Because Cromwell was so hated (and not without reason), her furious countrymen called her Máire Rúa, or “Red Mary,” and not just for her famous hair.

My brain was buzzing, with new story germs (that single infant) and history and everything that we’d discussed during our actual conference times, developing my series idea and revising a sticky novel manuscript and more. I’m writing more about the sights because it’s harder to write about my writing plans, especially when they’re still in flux (how much can I say about an idea which is still in development? just that I was feeling really inspired and enthusiastic!) but fear not, there was real work being done, too!

(I’m writing about my 2015 trip with Ireland Writers Tours. Next up: very famous cliffs.)