Dún Aonghasa is an ancient circle fort built on Inis Mór, the largest of the Aran Islands. It was probably a complete enclosure at one point, but the cliffs have eroded and collapsed with part of the fort into the sea. 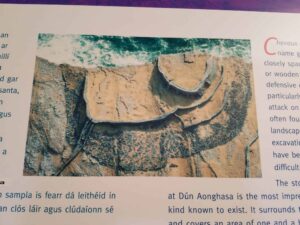 The cliffs are about 280-300 feet high above the sea and look upon the Irish coast on a clear day, which may have contributed to the choice of location. The site was first enclosed with a more primitive stone wall about 1100 BC, and ultimately it had four concentric stone walls of startling engineering, encompassing about 14 acres of protected area. It also featured a cheval de frise between the third and fourth walls, a field of deliberately placed upright stones meant to seriously impede any charge by an enemy force.

Today, it’s a fantastic example of the differences in liability litigation between the USA and most other countries. Here, the site is not disturbed by railings and sheets of Plexiglass in an attempt to protect stupid visitors from themselves; officials have simply erected a sign warning of the inherent dangers (hello, there’s a GIANT CLIFF and a lot of really old rocks you shouldn’t climb on) and expect people to take responsibility for themselves. It’s kind of refreshing, actually.

The islands are geologically an extension of the Burren, so they have the same karst landscape.

view to the fort from the walking path

The cheval de frise beyond the third wall.

my sister Alena at the fort’s edge

Stone steps to the upper walls.

fossils in the path (plentiful!)

The cheval de frise beyond the third wall.

Oh dear God I am looking down.

view of cliffs from Dún Aonghasa 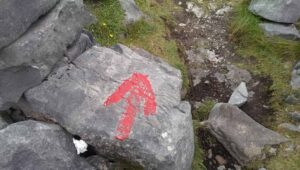 This wasn’t my first visit to Dún Aonghasa. I came here last year as well, walking from the coast to the spectacular Wormhole and then cross-country to the fort. To start, one crosses the karst, looking for the painted arrows to the Wormhole.

The Wormhole is a natural rectangular pool (the stone here fractures into rectangles, making it perfect for fort walls and such), made newly famous by a Red Bull Cliff Diving event. (Update: it also showed up as an exciting site in The Songweaver’s Vow.)

Walking to Dún Aonghasa atop the far cliff

the coast can be treacherous

Laura on the rocky coast of Inis Mor

the stone walls are impressive

trekking across the karst

It was during this walk that I realized I was walking on the island of Thisby, from The Scorpio Races by Maggie Stiefvater. It’s not, of course, not really; Thisby is fictional. However, I’d lay good money that it’s based closely on Inis Mór or another similar island. It’s just too parallel. It has the identical rich and insular culture which would bind some and repel others, the same small population (about 800 on Inis Mór), and the same gorgeous and dangerous coast. (Bonus: the village where one starts the walk to the Wormhole is called Gort na gCapall, or the Field of Horses.)

Yes, I learned a tiny bit of Irish. I usually try to pick up at least some pidgen language for anywhere I go, and I’ve been using Duolingo‘s Irish program for a while. Today I delighted a restaurant server by confirming my order in Irish: “Anraith? Anraith. Anraith glasraí. Agus aran. Agus im!” (Vegetable soup, and bread, and butter.) I then promptly confessed we had exhausted much of my useful vocabulary. (The Aran Islands retain Irish as their first language, but English is a universal second.)

There is more to Inis Mór (also Anglicized to Inishmore), like the ruins of the Seven Churches (a misnomer, as there were only two and some supporting buildings), an important early Irish Christian site. But one can’t do justice to the island in a single blog post, so I’ll pause here.

(Again, thanks to Ireland Writers Tours for bringing me here, and keep an ear open for the 2017 workshop with me as your instructor! And don’t forget my contest running this week.)

If you haven’t read the YA bestseller The Scorpio Races, you really should. It’s got everything you need — impossible odds, lots of folklore, a slow-burning romantic subplot, and killer carnivorous horses.