Ireland is for Writers #1: Galway

Last August I took a week in Ireland at a writers’ retreat of sorts. It wasn’t just a writing retreat, though I did do some writing. It was also a mini-workshop, with writing classes led by authors Susan Spann (The Shinobi Mysteries) and Heather Webb (Becoming Josephine, Rodin’s Lover). And it was also a tour of western Ireland.

Let me tell you about it.

First off, I landed in Dublin and immediately spied what I knew would be waiting: 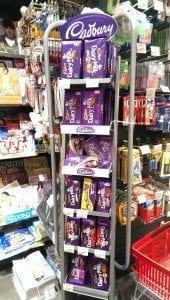 Cadbury! I must be in the right place!

I took the train from Dublin to Galway, which may have cost me a bit more than the bus (not much) but was a proper train instead of a bus. Nobody actually likes a bus ride, you’re just happy to have transportation. A train ride is actually comfortable and often has better scenery. 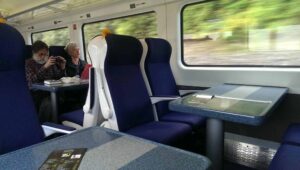 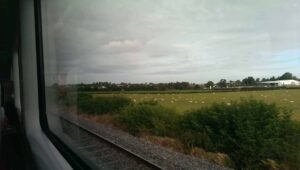 I walked about Galway for a bit with a tour app on my phone, finding lovely views and old bridges and things like the place where the term “lynching” was born. 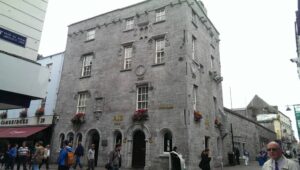 The Lynches were a powerful family in the area, and their 16th century castle (fortified town house) is the only remaining intact secular building in Galway. Today it is a bank branch, which I suppose speaks to its fortifications.

James Lynch FitzStephen was the mayor of Galway in the 1490s and the host of a young Spaniard named Gomez, whom he had brought back from Cadiz to visit Ireland, promising the young man’s parents (with whom FitzStephen had stayed in Spain) to keep him well. FitzStephen’s son Walter (age 21) fell into friendship with Gomez (age 19), as he made friends with everyone, and so things went well right up until Walter got it into his head that his girl Agnes was looking upon the Spaniard too keenly. Gomez was invited to visit Agnes’s father, who wanted to practice his Spanish (as there was trade between the two countries and Galway was a merchant city), but when Walter saw Gomez leaving Agnes’s house that night, Walter took it poorly, and by this I mean Walter stabbed Gomez to death and tossed his corpse into the Corrib River.

Walter regretted his action instantly, but murder isn’t the kind of thing that gets a do-over, and he fled into the woods to cry over the death of his friend and the ruin of his life. At morning, he walked back toward town to confess. He came upon his father the mayor and guards searching the crime scene and declared himself the murderer, and he was arrested.

The trial was brief, consisting primarily of Walter’s confession and the supporting evidence found by the town guard (Gomez’s own dagger was still sheathed, the murder weapon and a hat were left behind by the murderer). Weighted by his obligations as host to Gomez and a guest of Gomez’s parents, and by his duties as the law-keeper of Galway, Mayor James Lynch FitzStephen unhappily condemned his only son to death.

Walter was a popular figure, the virtual jock captain of Galway — he was easy with friendship and money, and the town liked him. As sometimes happens when popular figures commit crimes, the town wanted to forget the crime happened or wanted legal leniency — but it started to get ugly, with a mob gathering outside the prison and “were prevented only by the military force from attacking the prison, and pulling down the magistrate’s house.”

FitzStephen went into his son’s cell and said he’d stay the night with him to make sure the prisoner was not freed. A priest who accompanied him reported that Walter asked his father if he had any hope of clemency, and his father answered that if anyone else were the judge, FitzStephen would be weeping and petitioning for mercy, but as he was the judge and responsible for upholding the law, he could only come with the priest to help Walter prepare to meet his end.

That must have been a helluva night. 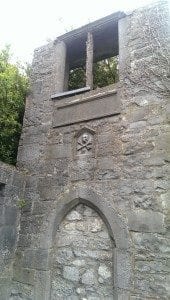 The Window. (not really.)

In the morning, they tried to go to the place appointed for execution, but Walter’s mother had gone to her own people to rouse a rescue attempt, and the local populace had gotten only more ugly overnight, and not even the town guard could keep them back from the walls. FitzStephen took Walter upstairs above the assault, put a noose about his neck, embraced him one last time, and shoved him out the window.

FitzStephen fully expected to be killed by the angry mob, but — either stunned by the sudden death of the young man, or finally affected by the grieving and principled father’s dilemma, or both — the crowd quieted and dispersed. FitzStephen shut himself inside for the rest of his life, seen by no one but family.

The window where this happened is often said to be this one overlooking Market Street, with a commemorative or apologetic skull added in 1624, but it’s reported the actual window was another, now destroyed.

Opinions may, no doubt, be divided as to the cruelty or inhumanity of the father; but few will question the integrity of the judge, or the equity of the sentence; nor can it be any longer surprising, that, after so brilliant an example of justice, united to the general character of the inhabitants, the town attained, as before observed, that degree of universal credit, which it will be found to have done within little more than a century after this period.

You can read a 19th century retelling here, but be aware that there is no contemporary account of the event. This has been taken to mean that it is legend only, or that the original report didn’t survive. The argument has been made that the window currently advertised as the window is set in a wall with the wrong architecture for the period, but as I noted above there’s not much argument that the advertised site is accurate. It certainly wouldn’t be the only case where a historical site has been relocated or rebranded for tourist convenience and marketing.

If this is indeed the origin of the term “lynching,” as has been alleged, then it’s interesting to note that today a lynching is usually a mob action to hang someone, rather than to prevent his death, as it was here. In both cases, however, it is a mob acting against the law’s judgment.

Across the river sits the Claddagh,  an old fishing village once outside the city walls but now part of Galway. It’s the home of the Claddagh Ring, which became internationally ubiquitous in the 1990s boom of Celtic interest, but which first appeared in Claddagh in the 1600s. (Though Wikipedia tells me the rings were not called “Claddagh Rings” until the 1800s.) 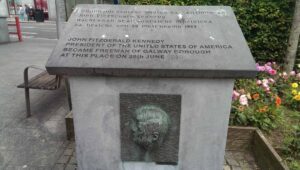 You’ll also find Eyre Square, named for another prominent historical family, with a monument to President John F. Kennedy’s visit to Galway in 1963, when he became an honorable freeman of the town. (The park was officially renamed “John F. Kennedy Memorial Park” in 1965, but it’s still Eyre Square just as that tall building in Chicago is still the Sears Tower.)

By now it was time to head to the bus station to meet my group, which was fairly easy to find by their American accents. We gathered ourselves — “Are you here for the writing tour? Me too!” — and then met Fiona, our hostess and guide. We packed our luggage into a trailer, climbed aboard our van, and set out on our new adventure.

More journey tales to come! But if you want a sneak peek, check out www.IrelandWriterTours.com, which will be offered again in 2016 with several different coaches. I’ll be going again this year in July; who wants to join me?