Just because a book is a fantasy does not mean it does not require research (and in fact often requires more). Right now I am writing about the plants and animals of Asgard, and I am working to make them as probable as possible.

How do we know what animals lived and what plants grew in a land that never was? We look at where the storytellers lived. The Danes who first told these stories likely based their creatures and plants on the more familiar specimens they knew.

Yggdrasil, the great tree which holds the nine worlds (including Asgard, the world of the gods, and Midgard, our own human realm), is described as an enormous ash tree. We can suppose it was an upsized version of the common ash (also called European ash, with the delightful taxonomical title of Fraxinus excelsior) once found all across Denmark, a tree valued for its ecological role as well as its lumber.

It is not hard to guess how the ash tree, in an era before mechanized deforestation, could inspire awe. In the 18th century an Irish ash was recorded, in County Galway, at 42 feet in circumference and roomy enough within its hollow trunk to admit a schoolroom for years.

Unfortunately, the common ash is all but doomed today. An invasive Asian fungus has devastated 90% of Denmark’s ash trees so far, and only 120 or so trees in the entire country have been found immune. It is a sad tale eerily reminiscent of the United States’ own chestnut blight. This fungus has spread across Europe and entered the UK, and things look bleak for the forests.

Not all the creatures of mythology were great monsters. Ratatoskr is a squirrel running up and down Yggdrasil, primarily to deliver insults between an eagle and a serpent at opposite ends of the mighty tree. This little messenger would almost certainly be a red squirrel, thin-furred in the summer and fluffy with long ear tufts in the winter. It’s a cute little rodent — and another species endangered today because humans brought a competing non-native species, the Eastern grey squirrel, into its habitat, which is simultaneously being greatly reduced. Some estimate the red squirrel may face extinction within years.

We’re getting dangerously near our mythological components becoming myth indeed. If you’ve forgotten, we no longer have the delightful kawauso, the Japanese otter youkai of folklore, because the Japanese otter is extinct. Seriously, people, we need to get our act together.

Also found on Yggdrasil are four deer, nom-nomming their way into mythological fame on the tree’s young shoots. These four are named Dain, Dvalin, Duneyr, and Dyrathror, and they are likely roe deer, a common species and adapted to the Northern climates of the Norse. I am pleased to say that roe deer are going strong, with a healthy population, but remember that the original Bambi was a roe deer, before Disney animated him as a whitetail, and we all know how that worked out. 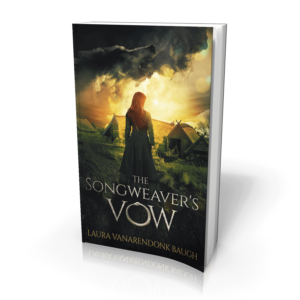 UPDATE: The Songweaver’s Vow releases February 21, 2017, and you can download a free preview at the bottom of the page (“View Book Sample”). I hope you love it!