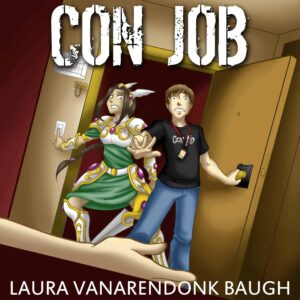 So this is fun — Con Job is now an audiobook! So if you’re pulling a long drive, or trying to ignore the stitch in your side during your run, or picking up clutter in your living space, or wherever you listen to audiobooks, now you can do it with Jacob and his geeky friends.

Of course, you have to be prepared for a little murder along the way. Continue reading Okay, okay, I know this is the third time I’ve mentioned Star Wars in the last two months. But it’s been kinda everywhere, y’know? And I just wanted to do a round-up of some of my favorite cultural references, from music to electric cars to party food. Continue reading

I’ve mentioned previously that I cut an annual autumn maze. What I didn’t mention is that the last couple of years, I’ve used a secret theme.

It’s hard to invent a wholly new labyrinth each year without being repetitive, so one year I chose an usual word from a book title, a word I figured no one would recognize, and used it as the basis for my maze. It seemed to work pretty well, the maze was reported properly twisty — the word was kitsune — and no one realized they were actually walking through connected letters.

That became my private joke. Half of the maze was bizarre swirls and winding paths, meant to draw out the younger kids but not lose them, and half was a series of interlinked passages based on some personal literary reference. But last year, I was found out, thanks to Google Earth. My mother, who with my father owns the field in which the maze is cut, was looking up her property’s aerial view for some reason and realized the map had been updated after I’d done my maze. Continue reading Remember, I’ll be signing at Robots & Rogues Bookstore in Lafayette, IN, during TippyCon, just across the street from the bookstore. That’ll be April 4, 2015, so mark your calendars! It’s a great time to pick up Con Job, a geeky murder mystery.

Bonus: I may be in costume. I am a cosplayer, after all. Any requests?

The March Hare with Alice, the Dormouse, and the Hatter from Alice’s Adventures in Wonderland (Photo credit: Wikipedia)

During breeding season, it was said, hares were bolder and more active than at other times of the year. Hence the phrase “mad as a March hare,” or “March mad,” and finally “March madness,” a phrase which has been appropriated to refer to basketball tournaments.

As European hares have a six-week reproductive cycle which repeats from January to August or so, I am not sure why they were supposed to be particularly mad in March. I suspect it had something to do with being more visible in the spring as they also rushed about to recover calories spent in the winter and the general thank God at last there’s sunshine shared by all species. But let’s not quibble.

And so in the spirit of March Madness, both leporine and athletic, the CIR blog is having a March Madness book sale and giving away some books. Continue reading

Go to Digital Book Day to find lots of titles in lots of genres by lots of authors. All free, today only. My free title today is Con Job (follow link to download), but there are all kinds of books available. But hurry, because the free downloads end tonight.

And remember, be kind and review the books you grab today. Reviews make authors happy!

Mark your calendars: Monday is the day to pick up lots of free books!

Go to Digital Book Day to find lots of titles in lots of genres by lots of authors. All free, one day only. Continue reading

My writers’ group had a cooler-than-usual meeting last month.

Writers’ groups are generally pretty cool. We don’t always sit around in black berets and drink coffee or wine and comment on existential truths in literature; that’s for special occasions only. Usually we have a few snacks and critique each other’s submissions. But this session was a special occasion of another kind; we had a fiction pitch-in. Continue reading

I have a short list in Evernote titled “Unofficial Goals Indicating I Have Arrived :D”. There are only a few entries, formatted as a checklist, of cultural ripples I have observed around successful stories.

I keep the list a secret, because I don’t want to influence the process. I want to see the organic ripples — I want a reader to tweet my title on #FridayReads because she was enthusiastic about the book, not because a friend did it just to make me feel good. Only once an achievement has been unlocked do I allow myself to share that it was ever a goal. (Yep, a #FridayReads appearance was one!)

And today I can check off another. Fan art. Continue reading

I’ll be speaking at ACen (also known as Anime Central) this weekend on a number of topics, including Japanese Folklore & Mythology. The talk isn’t strictly limited to Japanese tales, but that will be the focus since ACen is an anime, manga, and J-culture convention. Admission is by convention badge purchase only.

(Also, yes, I’m at a convention the week Con Job releases. We’ll try to keep the corpses to a minimum.)

Want to know more about the background of the Kitsune Tales — or of Sailor Moon, Dragonball, Princess Mononoke, or any other blockbuster title which has a lot of references to folkloric sources? See you there!