I Walk a Lonely Road: my new treadmill desk

So, it turns out that sitting on your butt for long periods of time, like writers do, is really bad for you.

This should be one of those no-brainer things — sedentary lifestyles are bad, this isn’t news — but it really came home to me when I realized that since I became a published author and started really taking my writing seriously, I’ve gained almost 20 pounds. Ouch.

Time to take back my life!

I had a great exercise program going of short, high-intensity workouts, but the husband and wife leading it had a messy divorce and when I tried to follow their separate subsequent programs, there was too much sniping and allegations of domestic abuse and I just couldn’t do it. Got soured on the whole thing. That was about the time I started hardcore revisions on a manuscript and started sitting more hours per day. End result, health disaster.

And I really, really hate taking time to do boring exercise.

But one of the things which seemed plausible was a walking desk, also called a treadmill desk. I like to walk, it’s easy and effective, and most of all, I could be productive and not feel like i was losing time.. (Don’t tell me that time for my health isn’t lost. I believe you, I really do, but it doesn’t change the way I feel during the exercise itself when my mind is thinking of all the things I could be doing.) So I finally decided to try it. 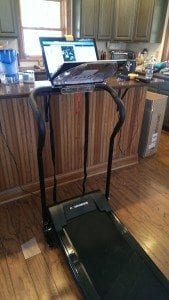 Commercial walking desks can be quite pricey, so I cobbled together a cheap version to test the idea of it. My entire set-up cost less than $250. It’s far from ideal, and if I decide I’m really into this I’ll upgrade, but in the meantime I can at least get a feel for  the thing.

I’m walking only about one mile per hour, so typing is pretty easy. The only keyboard problem I’m having could be alleviated with a better setup, as this shelf/treadmill combo has my keyboard at an awkward angle. The SurfShelf works with this little treadmill, but it’s really designed for a larger model, and while my laptop feels pretty secure up here, the angle has me bumping the touchpad occasionally so my cursor jumps. Annoying, but then I’ve only been doing this a few minutes now. But I’m totally blaming it for any typos.

So the ergonomics of my cheap system are a bust, but if my productivity improves as many report (and as documented here), then I can justify a desk upgrade. We’ll see.

Anyone out there using a treadmill desk now or considering one? What do you think?

Tagged  nothing in particular.
Bookmark the permalink.