Stakes on a Plane — Men, Women, and Entitlement

Today’s post features a rude game of airplane footsie and some sociological pronouncements.

I had an interesting talk with my husband the other day about perceived entitlement to women. That sounds a lot more sociological than it really was, but it had to do with concepts of “earning” a woman: buy flowers or a dinner, do a favor, even call a compliment, and she’s yours. (One theory I have read is that because the male hero always gets the girl in fiction, and because we’re all the heroes of our own lives, some men then expect to get the girl.)

My day job is in behavior, where we know that frustration produces aggression. It’s why when I spent an hour and a half trying to solve a jumping puzzle (I am ridiculously bad at video games) and fell yet again, and my husband pointed out that I should have jumped there, that I snapped like some sort of were-gamer.

(My sister later made me some helpful motivational images.) 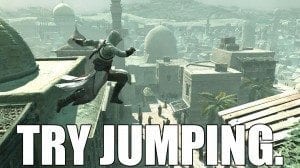 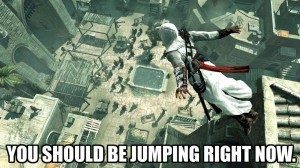 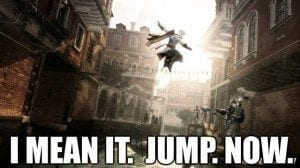 And yep, it’s easy to see this “frustration produces aggression” concept in interactions between the sexes. Any woman who moves regularly in public knows that if a guy whistles at her or calls “Nice legs” (or something rated rather higher by the Motion Picture Association of America) and she ignores him, there’s a very strong chance of an angry and derogatory escalation.

“Hey, lookin’ hot! Smile, sweetie!”
/I continue walking, still checking my phone or looking ahead to a sign or doing exactly whatever I was doing./
“Bitch!”

This isn’t unusual. In fact, it’s so far from unusual, it’s expected. And women are expected to deal with it, because some men feel they’re entitled to attention or even more. Their social stakes are invested, and when their disrespectful overture doesn’t immediately win her over they mostly resemble an over-sized toddler who points at a toy and then begins to tantrum when it isn’t promptly delivered.

Socks on a Plane

So I’m actually writing this blog post on a plane, heading to a writing conference. I’ll post it when I get internet again. A few minutes ago, something brushed my leg. This caught my attention, because the woman beside me was quietly reading and minding her own business, and the touch came from behind me. And then it came again, and it stayed. The man in the next row back had extended his shoeless foot beneath the seat, and his toes were flexing across and around my calf.

Ooookay. I gave him the benefit of the doubt for a moment — maybe he was simply stretching, and he didn’t know he’d bumped me. Like feet under a table. But then the foot snugged up against my leg again, and the toes continued flexing and rubbing.

Now my leg is warm and girly-shaped, and while a brief bump through a shoe might not instantly identify it as a feminine calf, repeated contact through mere sock fabric should be able to peg it pretty quickly. I half-turned my head, and I heard a cough and the toes rubbed up against me again.

Okay, buddy, we are done here. I moved my leg back, just slightly, pinning his foot against my seat. I figured this would send two possible messages, and he could choose which might be more applicable:

Then I released his foot so he could make a decision. I don’t know which message he got, but the foot disappeared in a hurry.

So this is the kind of story (the surprise-foot-massage, not the metatarsal-pretzels) which women may relate to other women, but which I don’t think often get shared with men. Maybe that’s because we don’t want to talk about this stuff with the gender which enacted it (either because it’s uncomfortable, or because we don’t want to sound like “all men are dogs”). But I think men should probably hear them more often.

What was weird was that while I don’t generally subscribe to the “women have it so tough” school of thought — I’m more of a “women can do what they want if they put their minds to it” advocate — I was actually thinking as I entered the airport today even before surprise-footsie that many men honestly have no idea of what women consider as they go through their day. How many men think about where they park in relation to other cars, street lights, and door visibility? How many men have consciously steeled themselves for verbal abuse if they don’t favorably respond to a stranger’s assessment of their physique? Seriously, it can take a lot of energy.

Challenge to my guy readers: Take just two hours of your day and try to perceive like a woman. Know how many people are in the parking lot, and what gender they are, and whether or not they’re flanking you. Choose a running route based not just on traffic but on assault/abduction risk (and do you even know what you’re looking for there?). What do you do when a car circles back to pass you again? (You might have to imagine this scenario, but it’s happened to me.) Weigh whether taking the stairwell is a health benefit or a potential risk, and make a conscious decision. That guy who stops you in the hotel corridor to ask for a pen — does he legitimately need a pen, or is he trying to get you to look down at your purse or open your room door again? We’re taught to start evaluating these things from adolescence. It might give you a bit of insight into why we do some of the things we do. (No, we don’t think all men are dangerous — but we don’t assume all are not.)

And if you think that’s crazy paranoia, then you’ve just proved the point. Read this story, menfolk, and keep in mind that while the death threat is a more extreme case, probably most of the females you know have experienced something similar or know a friend who has.

And suddenly the wary, seemingly-overblown reaction of the woman whose car window I tapped yesterday to tell her two tires were dangerously low doesn’t seem so out of line. She rolled down the window only a crack, looked all around the car to be sure I wasn’t a distraction for something more sinister, and waited until I was well across the parking lot before she checked her tires. And unfortunately, I knew the entire time that she wasn’t wrong to do so.

[Update: this news story from home just appeared in my Twitter feed as I was polishing the post. To celebrate a birthday, they’re gonna go rape a woman? He can abduct, beat, and rape a woman for a freakin’ birthday present?! I’m not even going to try to detail what’s wrong with that attitude, but, yeah, entitlement.]

But, back to entitlement.

So, guy who got angry when a girl didn’t smile and prance at your observation on her shape: you just proved she was absolutely right to steer clear of you. Thanks for making that an easy call.

Guys who aren’t that guy: good on you! Now look at your guy friends and see if any of them are displaying unconscious assumptions of entitlement. Maybe suggest an adjustment, you know?

And women, don’t be enablers. You don’t have to be nasty to those poor idiots who never learned how to open a conversation, but you don’t have to “be nice,” either. You’re not “too good to talk to a guy” as they might accuse, you’re just too good to waste your time on jerks who will out themselves if given a chance.

And if someone does cross the line and assume he has an inherent right to you? Feel free to send him home with a limp or a court date. We’re done with that.

And hey, because it bears repeating, let me say again that this isn’t a blast on “all men are dogs.” (No, seriously, I like dogs, and I would use a much stronger metaphor for the problem people….) In fact, here’s a man who gets it. Good on him, too.